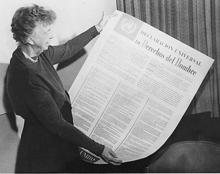 Eleanor Roosevelt with the Spanish language version of the Universal Declaration of Human Rights.

History -When the racist atrocities committed by Nazi Germany became known after World War II, the world community concluded that a universal declaration of human rights which specified the rights of individuals was necessary to give force to the Human Rights provisions in the United Nations Charter.

In 1946 the UN established a committee, chaired by Eleanor Roosevelt, to draft the Bill of Human rights. On December 10, 1948, the Universal Declaration of Human Rights was adopted by the United Nations. Following the adoption of human rights,  United Nations committed  member countries to publicize, and teach the universal human rights  especially in schools and other educational institutions.

Preamble: Whereas recognition of the inherent dignity and of the equal and inalienable rights of all members of the human family is the foundation of freedom, justice and peace in the world,

Whereas disregard and contempt for human rights have resulted in barbarous acts which have outraged the conscience of mankind, and the advent of a world in which human beings shall enjoy freedom of speech and belief and freedom from fear and want has been proclaimed as the highest aspiration of the common people,

Whereas it is essential, if man is not to be compelled to have recourse, as a last resort, to rebellion against tyranny and oppression, that human rights should be protected by the rule of law,   read full text of human rights

Iymen Chehade says that newly-elected Illinois Congresswoman Marie Newman promised him a job but backed out of a signed contract after he criticized her positions on Israel. Chehade has filed a breach of contract lawsuit and a national-origin discrimination claim against the congresswoman. https://mondoweiss.net/ #palestine #marienewman #palestinian #freespeech #freepalestine #apartheidisrael #apartheidisrael #colonialism #racism
The United Nations human rights experts have warned that violence, including assaults and property destruction, by Israeli settlers against Palestinian civilians in the occupied West Bank has increased substantially in recent months. During the first three months of 2021, more than 210 settler violent incidents were recorded, including one Palestinian death, they said. https://www.aljazeera.com/amp/news/2021/4/14/un-experts-highlight-rise-in-israeli-settler-against-palestinians #palestine #palestinian #palestinelobby #freepalestine #apartheidisrael #apartheid #racism #colonialism #colonial #settlercolonialism #palestinianlivesmatter #blm
Israeli soldiers have shot dead a Palestinian motorist who they said tried to ram them at a checkpoint in the occupied West Bank – an account disputed by his wife who was with him in the car. Salem Eid, the mayor of Biddu village where the man lived, said the Palestinians may raise the incident at the International Criminal Court, whose prosecutor announced last month it would formally investigate alleged war crimes in the Palestinian territories. https://www.aljazeera.com/amp/news/2021/4/6/israeli-troops-kill-palestinian-driver-in-disputed-incident #palestine #palestinian #freepalestine #apartheid #apartheidisrael #bds #boycottisrael #palestinianlivesmatter #blm #colonialism #colonialsettlement